Edit 7 July 2021: BOOTHYPE was lucky to get a pair of adidas X Speedflow.1 samples in hand from Tokyo Football. Here is our first impressions of it.

The adidas X Speedflow.1 now has a adidas X19.1 esque knit tongue, albeit one that is much thinner. The strip of plastic at the edge of the tongue that was found on the X Ghosted.1 has also been removed, making the boot much more comfortable. That plastic strip on the X Ghosted had a tendency to ‘cut’ into my foot when making quick pivots and turns and I’m glad to see it upgraded here.

The upper has also seen a minor evolution instead of a revolution. It’s ever so slightly thicker than the one found on the Ghosted.1, but also softer and less plasticky. It feels nicer on foot out of the box as it adapts to your foot shape quickly, making for a much more comfortable wear. It’s still very thin, as evidence by how you can see the light shining through the boots, but it’s not Ghosted.1 thin where you could see the colour of your socks permeating through the upper.

I’m happy to announce that adidas have kept that amazing Carbitex tooling which I really loved from the Ghosted.1. The change in the tooling involves the heel area which is now made of a mesh material similar to the tongue, which seems to catch and hold my heel in place much better. All in all, the X Speedflow.1 is definitely a much more refined version of the X Ghosted.1, improving it on almost all aspects, especially when it comes to comfort.

Below is the original article from May 2021

Leagues around Europe may be coming to an end, but the football action isn’t ending any time soon. Not only do we have the (delayed) Euro 2020 coming up next month, we’re also about a week away from the highly anticipated Champions League final between Chelsea and Manchester City.

For boot nerds around the world, this is an exciting period because adidas has developed a habit of launching new boots for their marquee players to display in the Champions League Final. We should expect the launch of the adidas X Speedflow .1 during this game.

Interestingly, the adidas X Speedflow .1 seems to share less similarities with the previous generation X Ghosted.1, but looks more of a direct successor to the X 19.1. Like the X 19.1, the tongue on the adidas X Speedflow .1 seems to also be made out of a mesh like material, which will go someways to keep you locked in without putting too much pressure on your foot the way the the Ghosted.1’s synthetic tongue did. That heel tab is also made out of a knitted material, which I’d expect will make the boot a much more comfortable one.

The upper also looks much less translucent as compared to X Ghosted.1, with what looks like a slightly thicker upper made from a fused layer of mesh and synthetic. Thankfully, the awesome Carbitex tooling from the X Ghosted .1 has been carried onto the new generation.

We also got a peek at what looks to be an upcoming colourway inspired by the 2013 red adizero Messi signature colourway, possibly to be worn by the man himself in the upcoming Copa America tournament. We can’t wait.

adidas are the masters of revisiting past concepts and relaunches.

I won’t deny, they feel very much like the 2014 adizero with that Hybridtouch upper. Having said that, the upper does feel like adidas has removed the foam backing so it feels thinner than usual. 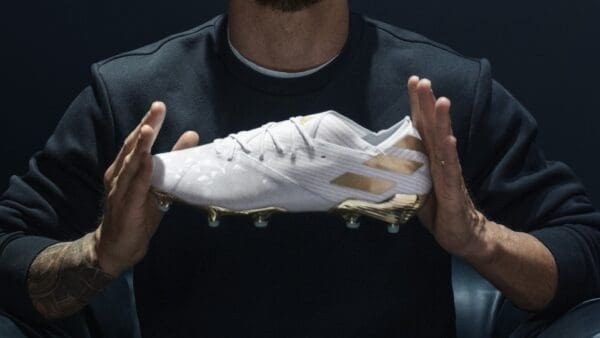