Kylian Mbappe is primed to be the next big Nike star as Cristiano enters the autumn of his footballing career. With the “Dream Speed” launch earlier this year, CR7 shared the limelight with the French World Cup winner in a colourway that was donned by both mentioned players and Sam Kerr.

I’m glad that it didn’t take long since then for the big Swoosh to adorn Mbappe with his own colourway – the Bondy Dreams on his favourite Nike Mercurial Superfly 7.

The white and green concept is inspired by Mbappe’s roots in the district of Bondy, the Parisian suburb where he started his footballing journey.

The fresh design looks real sleek with a white base and a green geometric pattern that is sprawled all across the heel, side and front of the boot. The Mercurial Superfly will also come with a lot nice touches such as the gold accents on the soleplate and the swoosh. And of course, as a World Cup winner with France, the 2 gold stars are front and centre along the front of the dynamic fit collar on one side of the boot while the other gets his new “KM” logo. The French completes the design with the tri-colour flag getting representation along the Achilles heel area.

Personally, I truly love this collection as it’s not only looks good but perhaps I’ve had a bit of fatigue with Cristiano. It’s Mbappe’s time to shine and this looks to be a good first entry to what would be a long relationship with Nike.

“Bondy is always in my heart; it’s where I found and fell in love with football,” says Mbappé. “It helped shape me as a person and as a player. I have a lot to be thankful for and it is special that Bondy is at the center of this collection. Back then I had my heroes and many of them had their own special edition Nike boot, so to join them in now having one of my own is a dream come true.”

Damn right, Kylian. And long may this continue. 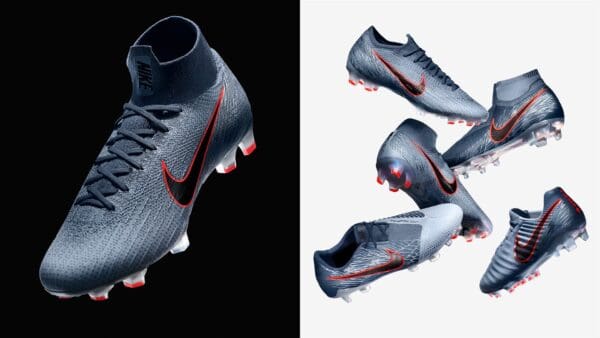