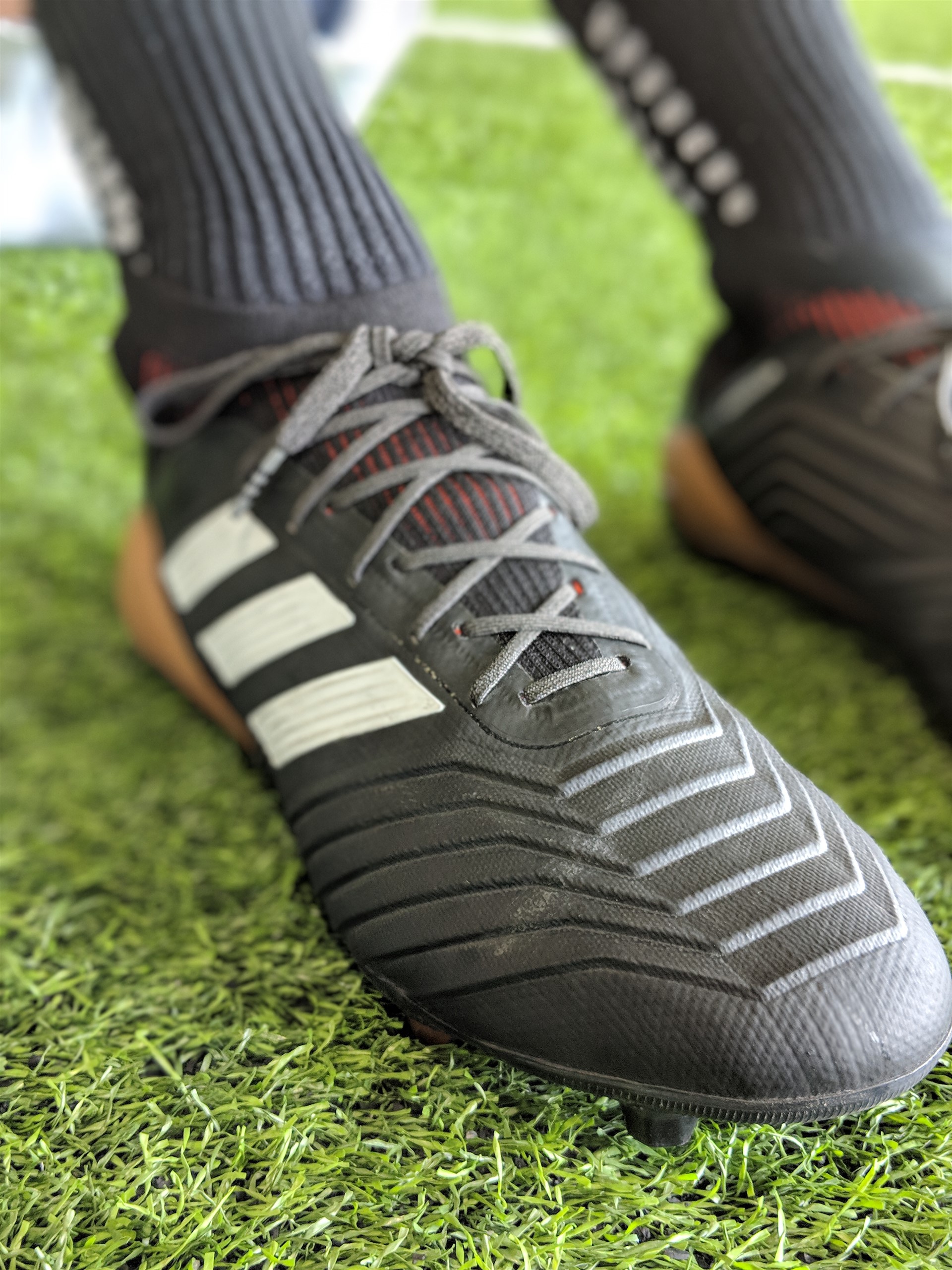 9
out of 10
Find the best prices for Predator 18.1 below
Prodirect Soccer

Is the adidas Predator still a beast? We took a Predator 18.1 to the pitch to find out.

The History of the adidas Predator

The Predator is one of the most iconic boots to have ever graced the game. Speak to old school footballers and they will wax lyrical about the first ever power and control boot that everyone wanted. Worn by legends like David Beckham, Zinedine Zidane and Alessandro Del Piero, the Predator was primarily made from soft kangaroo leather, rubber elements for grip and ball spin and a bladed stud pattern. The classic red, white and black  boot was provocative, aggressive and looked dangerous – the world never saw anything like that before.

Launching in 1994, the each generation of the Predator was better than the last culminating with the Mania in 2002 as the last of the great Predator line. Consumers were slowly weaning off the Predator over the next 10 years due to great competition in the power/control boot silo. adidas said “RIP!” to its most cherished silo in 2015 in favour of a rebrand into the now defunct “Ace” line.

What adidas intended to do was to give the Predator some time away from the limelight and used the Ace line to experiment concepts and innovations without the pressures of the “Predator” brand name.

In November 2017, adidas revealed the return of the Predator to much fanfare. It carried the spirit of the original Predator with its aggressive ridges and silhouette while taking on the modern innovations from the Ace with its knitted upper, mid-cut sock construction and an improved laceless variation. Exit David Beckham, enter Paul Pogba.

Sam Handy, VP of Design for adidas Soccer, said: “When designing the Predator 18+ we wanted to create the most innovative boot on the market while staying true to the very ethos of what made the Predator such an iconic boot. We wanted to create a boot for those players who control the game through a killer touch or defense-splitting pass.”

And boy did they deliver.

How does the Predator 18.1 feel on feet?

With the Ace 17, we had massive issues putting on the boots as the mid-cut sock design was not built with ergonomics in mind. adidas was still finding its way in creating a shape that would fit various foot shapse but they got it right with the Predator 18. We tried both the laceless Predator 18+ and the laced Predator 18.1 on feet and found it to be much easier to put on than its Ace predecessors. The lock down was also surprisingly good on the laceless 18+ but we would opt for the 18.1 for uncompromising lockdown and fit. Expect little to no slippages in the boot while you’re making those runs on pitch.

The interior, and especially the toebox, is absolutely comfortable and it does feel like you’ve worn the boots for weeks unlike the Ace which many complaint of an ill fitting shape and a dull plasticky sensation.

The Predator DNA is evident in the adidas Predator 18.1 with its sleek modern look coupled with a killer silhouette. What it’s missing though are the infamous rubber elements that many have attributed their curlers to. In its place, we have these ridges that appear on the instep and forefoot areas to help you bend it like Beckham.

Many a romantic were disappointed that the rubber strips were not present but we’re quite happy that adidas stuck to their guns as the design would have been quite clumsy with rubbery elements attached. Keeping the surface clean also meant that the Primeknit upper could remain soft – closely mimicking leather while being more water-resistant and durable. The upper is also treated with “Control Skin” that aids with grip in wet weather conditions.

The deep ridges do keep the ball contact “grippy” enough for our liking so it does seem that this new design is working out for the rubber-less Predator. Still love the old school swerving elements? Perhaps you can grab one of the remakes that adidas seem to be fond of launching in recent years instead.

The Predator’s got sole

With the growing popularity of artificial grounds (AG), adidas has been developing soleplates on their boots which would be adaptable for both firm ground (FG) and AG pitches. The Predator’s soleplate consists of 7 angular studs in the forefoot, and 4 in the heel base. The plate is well balanced, giving you decent mobility, flexibility and traction at the same time.

We were apprehensive about its performance on AG pitches as the boot looked to have long studs too long for AG pitches that may have caused injuries. Our worries were cast away immediately after stepping onto the pitch. The boots showed no instances of getting stuck too deep into an AG pitch and the surprisingly good traction would give many a speed boot a run for its money.

Many were hoping for the Predator to be built like a tank – reminiscent of the first few generations of the silo. However, those same people forgot that later iterations of the boot got sleeker, lighter and had a build that was more butter than brick. The Ace and now the Predator 18 has continued that trend but has upped the ante on the killer looks and technology. Unfortunately for the old school fans, the days of rugged, brick-like boots are long past. Even your no-nonsense leather boots are thinner and lighter at weights below 250g. The Predator 18.1 weighs at about 235g for a US9.5 and would easily be at least 60g lighter than its early predecessors.

The adidas Predator is the future of the control boot silo and the three stripes has developed one of the most complete boots in the market that could and should be worn by any player on the pitch – not just by the playmakers. We’re excited to see how adidas innovates on an already perfect boot and we cannot wait for more.

Special thanks to the good people of FutsalArena @ Yishun for allowing us to shoot at their excellent artificial pitch – perfect for Sunday kick-abouts with public parking and a fully sheltered facility.

Final Thoughts
An excellent all round boot that looks and feels like the natural evolution of the adidas Predator brand.
The Good
Sleek, modern design
Great lock down
Minimal break in time
Great all-round comfort
Easy slip-on for a mid-cut boot
The Bad
High price of $300
9
out of 10
Find the best prices for Predator 18.1 below
Prodirect Soccer
AdidasFootball Boot ReviewsPredator
3
0

[…] seemed a bit apprehensive at first as the studs look too long for the AG pitches we play on. In our review of the adidas Predator 18.1, the traction was surprisingly not too aggressive and worked well on both grounds. The Puma […]

[…] a relatively new line of boots which was only introduced in 2015 to replace the F50 silo. Like the Predator, the popular F50 line was involved in the big purge of 2015 when adidas scrapped their popular boot […] 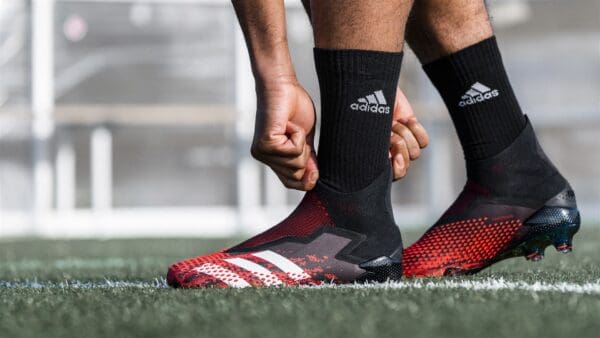